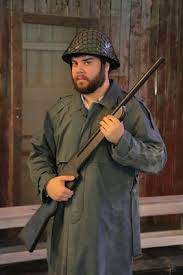 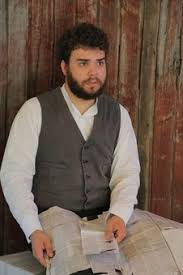 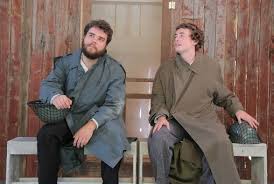 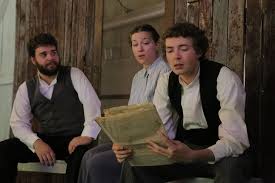 Chicken Feather Examines the War on the Home Front
Theatre Space By Adam Corrigan Holowitz - July 7, 2016 -Theatre & Film
“The titular subject of this play is the white feather movement, where young women would pin a white chicken feather on a man’s lapel to shame him into enlisting”

When Jeff Culbert was commissioned to write a play about World War One for Fanshawe Pioneer Village he first went to the back issues of The London Free Press. He looked at newspapers from just before the war started. This was to understand what Londoners would have been reading during that time and what the perceptions and opinions on the coming war were. “When you read a newspaper you get all kinds of cultural information, as well as getting the news of the time. I wanted to know what a person who lived in London would think about the war because the Free Press would have been their main source of information” says Culbert. This gave Culbert the idea to write about two brothers in his play Chicken Feather running this July at Fanshawe Pioneer Village in an AlvegoRoot Theatre production. Culbert also directs the play. There is one brother, Ryan, who reads the newspaper and that is how his view of the world is shaped. Then there is the other brother, Erin, who gets his news and opinions from the people around him and as a result has a very different view of the world.

Culbert says, “One of the reasons I wanted to make the newspaper so prevalent in the play was because I was surprised at what was in the paper.” He had always thought the attitude in the newspapers of that time would be “the war is coming, it is going to be short, it is going to be brief, easy and we will be home by Christmas”. This was not what Jeff found. Instead what was being written in the Free Press in 1914 was that the war would drag on for years and be terrible and bloody.

Besides the opinion pieces on the war, Jeff used other newspaper articles as inspiration. The characters make reference to advertisements that were actually in the papers. In the same issue of The London Free Press there was an article on the Irish Benevolence Society Picnic, which actually included a “fattest baby girl under one year” contest. This makes it into the play.

The titular subject of this play is the white feather movement, where young women would pin a white chicken feather on a man’s lapel to shame him into enlisting. The third character of the play, Muriel, is part of this movement. This puts here into conflict with Ryan, the brother who has been reading the paper. There are suggestions that Muriel and Ryan are a romantic item. Ryan wants nothing to do with the war and so the stage is set for debate between them. Both are very smart and articulate, which is why they might be attracted to each other, but they also hold totally opposed opinions on war.

The white feather movement is something that is difficult to understand in a modern context. It is not admirable to shame men into going off to war. Stefanie Flannigan who plays Muriel says that, “Personally during the first few reads of the play, Muriel came across as a villain.” The way she came to understand Muriel was to realize that Muriel has a specific passion for doing what is, in her mind, right. “She has a very black and white view of what is right. She never gives up on her morals. And her belief is that the war is necessary- that it truly is a war to end all wars.”

Culbert adds that the idea of patriotism was very different a hundred years ago, explaining that the understanding was that the enemy would come and attack your family and homeland if you did not go over there and fight them. With that in mind Culbert says, “Imagine saying, ‘I am not going to go and fight’.” That attitude would simply not seem to be an option. Jeff believes that our modern understanding of war which comes from growing up with questionable wars such as Vietnam or Iraq is very different from the 1914 understanding of war.

This is the second play Jeff Culbert has written about wars. His first was Choose, But Choose Wisely, about the War of 1812. In Choose, But Choose Wisely, Jeff wanted to tell the story of what gave rise to that not very widely understood war and how it played out. With Chicken Feather he was much less interested in telling the story of World War One and instead zeroed in on the dilemmas that grip the characters in the play. He says, “You can see this play and would not even know who won World War One,” because this play is so focused on the characters. The connection between these two plays is that they are both about people who want peace. Culbert says, “When I write a play about war it has to also be about the people who want peace.” With Choose, But Choose Wisely Culbert looked at Quakers who chose not to fight. With Chicken Feather the play examines Ryan who has to decide whether or not to join the army.

Chicken Feather is the second in a duo of plays that Fanshawe Pioneer Village commissioned about World War One. The first was Jason Rip’s The Big Lad which I directed last summer. Both Jeff and Jason ended up covering characters on the home front before, during and after the war. They did so very differently. Rip took a more mythic approach with his play, whereas Culbert’s play is character driven with great detail put into the dramatic situation. I find that Chicken Feather has tones of Chekhov because of the realistic characters. There are also tones of Strindberg due to the intimacy of the three person play.

One of the big differences between Chicken Feather and The Big Lad is that Chicken Feather concludes with a bit of hope. Culbert says that this was not his original intention. At first Culbert thought that when Ryan arrives back from war, he would not carry on with his relationship with Muriel. Culbert continues, “But then I got interested in the idea that things change over time.” People can change and get past an act that happened a few years ago. Jeff asked, “How much can people change?” And that extends to the question of peace. He says, “How much can you put behind you? How much can we get along with different nations who were, at one point, our enemies?” And how can warring nations over time become friends?